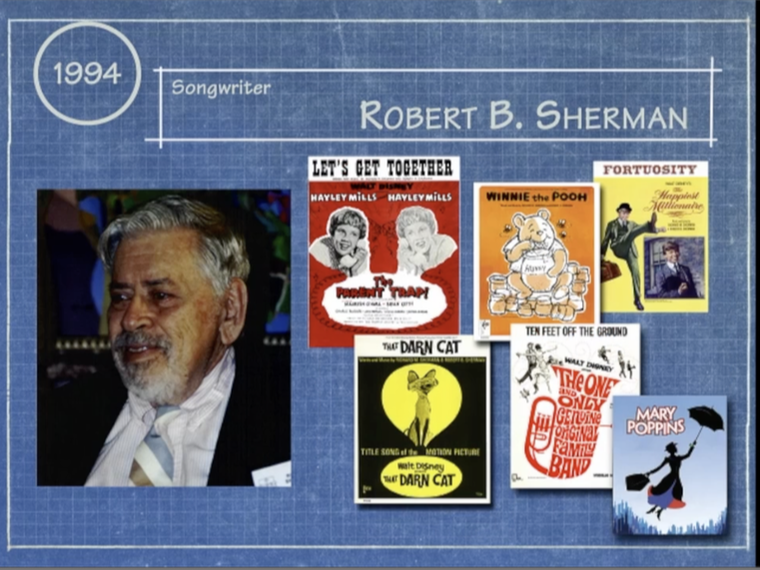 Richard M. Sherman and Robert B. Sherman spent 13 years at Disney, during which they wrote more than 200 songs for 27 films, two dozen television productions and numerous theme park attractions. Their career took off in 1958, when Annette Funicello recorded their song, “Tall Paul,” which became a Top 10 hit. Walt took notice and hired them. In film, they wrote songs for The Parent Trap, The Jungle Book, Bedknobs and Broomsticks and the early Pooh films. But they are best known for Mary Poppins, the 1964 film classic and, later, a Broadway hit. The score includes “Supercalifragilisticexpialidocious,” the Oscar-winning “Chim Chim Cheree,” and the song that became Walt’s personal favorite, “Feed the Birds.” Their many songs for the theme parks include “In the Tiki, Tiki, Tiki Room,” “Great Big Beautiful Tomorrow” for the Carousel of Progress, “One Little Spark” for the original show in Epcot’s Imagination pavilion and, of course, “it’s a small world”. They returned to Disney in 1998 to write songs for The Tigger Movie. Their illustrious career is chronicled in the 2009 documentary The Boys, which was produced by their sons.
​