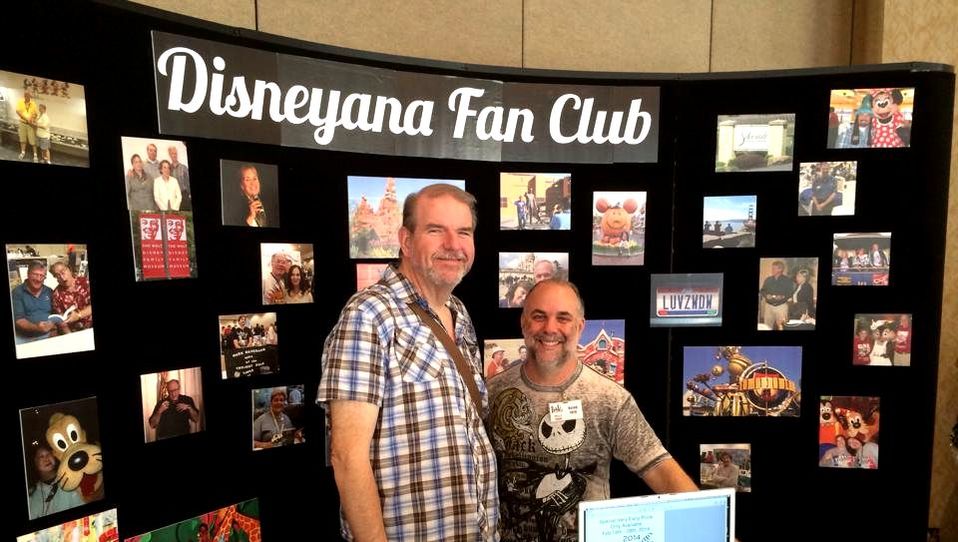 The Disneyana Fan Club was founded in 1984 as the National Fantasy Fan Club (NFFC) by Louis Boish in Southern California.

In 1993, the NFFC created the Disney Legends Awards and the first to be inducted were Marc Davis, Ollie Johnston, Bill Justice and Frank Thomas.

In 2009 the NFFC changed their name to the Disneyana Fan Club (DFC) with permission from The Walt Disney Company to use the “Disneyana” name.

In 2010, the DFC began the Heritage Award to honor individuals outside the Walt Disney Company. The first award went to Leonard Maltin.

Today, the Disneyana Fan Club has grown to 24 chapters and the National Chapter events now include the Disneyana Collectibles Show and Sale, Special Events, Road Rallies and Meet Ups throughout the year.

Remembering 30 Years of the NFFC/DFC

From the panel at DisneyanaMania 2015
​Reprinted from The Disneyana Dispatch Newsletter, August/September 2015
What better way of starting a convention than by remembering where we’ve been! The Disneyana Fan Club was formed in 1984 by group of Disneyana devotees, so this marks the end of our 30th anniversary year!

This passage of time was visually demonstrated by having everyone stand, then sitting down in five-year increments until at the end only the charter members were left.  And there are quite a few — at least 12.

Louis recalled our first convention was held right after Disneyland’s 30th anniversary, which included an all-night party.  All the conventioneers were at that party, and convened at 2 am  at Disneyland’s Alpine Gardens to view the Main Street Electrical Parade.  That was the first time everyone had gotten together.

Nicolasa credits the Mouse Club with our club’s origin. The Mouse Club was actually a privately owned company that held an annual convention. But when asked to have gatherings more frequently than once a year, the Mouse Club demurred. Thus the idea for a different kind of club. She still has the letter Louis sent calling the first get-together on May 19, 1984 at his home.

Dennis remembered Disneyland’s all-night party, how an artificial rainbow was created with searchlights, and how one of our members won a car from the Disneyland-General Motors promotion. (Normally every 30,000th  guest won a car; for the party it was every 3000th guest.)

The first NFFC convention was held at a hotel that no longer exists — the Grand Hotel. That was the only time there was a two-day show & sale. Louis credits the club’s longevity to being member-owned and -run.

Dave Smith was asked how the Disney Archives viewed the NFFC. When the Archives was founded in 1970, there were no Disneyana clubs. Unfortunately, the company in the 1970s and 1980s was not very friendly to fans. There was concern about misuse of copyrighted characters, so the company kept fans at arm’s length. But Dave felt differently. He attended the Mouse Club meetings as a sort of unofficial liaison. Dave felt this connection was important. Disney Legal agreed, but as a way of monitoring the clubs for unauthorized activity. Perhaps Dave could squash any misuse before Legal would have to get involved. Dave has attended every convention for both the Mouse Club and NFFC/DFC. He enjoys the presentations, even though he works with Disney every day. “It wasn’t really a job for me to come here, it was fun for me to come here, and I met some very nice people through the clubs. It’s just been a wonderful time and I’m still coming and I’ve been retired five years now.”

Dennis remembers Dave alerting the Club to significant pieces in the show & sales and the Club then purchasing these pieces for the Archives. Dave said “Yes. We are very thankful for that.” Dennis also remembered the first convention had one day of seminars, the banquet was at the top of the Grand Hotel, the Disneyland Ambassador that year was a special guest, and the keynote speaker was Ward Kimball. The animated feature The Black Cauldron had just been released and some of the young animators were guests and were very popular, much to their surprise. Andreas Deja in particular was wondering “Why are these people interested in our drawings?” The banquet was paused at one point so everyone could watch the fireworks.

David Schiller was also a Mouse Club member and reminisced about the friends he had made.  “It’s like family.”

What were some of the funniest memories?

For Dennis Ritchey, it was the 1994 banquet with Betty Taylor and Wally Boag and the way their thank-you gifts were presented (you had to be there).  Louis remembered when artist Sam McKim brought a lot of artwork to show. But for some reason he left it behind and the club had to arrange for a pick-up. Dennis also remembered Imagineer Bruce Gordon leaving the Splash Mountain artwork and model. Another memory was when voice artist Jodi Benson sang for a little girl.

Others were invited to share memories.  Here are some excerpts:

Barbara van Deusen: “Because of this group, I have been to Tokyo, I’ve been to Disneyland Paris, and I’m going to be going to Shanghai and Hong Kong, and it’s things that I would’ve never in my life done, because I wouldn’t have gone by myself.”

Dennis Tanida: “I think the Legends ceremonies that we’ve had have been fantastic, and the one that I remember the most is the one where we honored Roy E. Disney in 1999.”

Bill Atwood described the joy of asking Disney Legends to come to a chapter convention (49Ears), and having them accept! “So we had all these Disney Legends sitting at the house...I thought we were going to have more Legends than people. But one nice thing was a couple in our club had gone to, for two or three years, trying to adopt three children out of Russia. And the kids had just arrived in the United States, and that group of Legends that I just mentioned to you, gave the ears to those Russian kids….One of the little boys sees Marty [Sklar], and he walks over,  climbs up on Marty’s lap, and sits there and watches a Disney video that Marty had prepared.”
​
It’s been a fun Thirty Years!

The final item was unveiling a new logo. President Linda Rolls explained the reasons for this change, and the convention gift — a backpack sporting the logo (and filled with snacks) — was announced. As Linda summarized, “I hope you like it. We think that it’s going to give us a polished image, and that it is something that will appeal.”