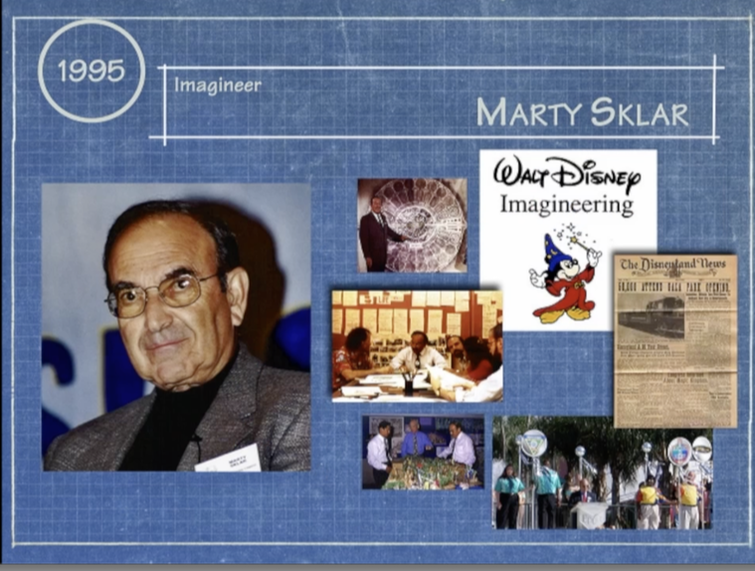 Marty Sklar was still a junior at UCLA when he was offered his first job at Disney. As editor of The Daily Bruin, he was a natural to take the reins of The Disneyland News in July 1955. He continued in the marketing department at Disneyland until 1961, when he moved to WED (renamed Walt Disney Imagineering in 1968), where he worked on attractions for the 1964 New York World's Fair. Among the attractions he helped to design during this period were The Enchanted Tiki Room and It’s a Small World. For nearly 10 years, he wrote personal materials for Walt Disney for use in publications, television and special films, including the script for Walt’s final film (in which he introduced Epcot to the world). In 1974 he became vice president of concepts/planning, and guided the creative development of EPCOT Center. As vice president of creative development, executive vice president and then president of Imagineering for nine years, Sklar supervised the design and construction of Tokyo Disneyland, the Disney-MGM Studios, Disneyland Paris, Disney's Animal Kingdom, Disney's California Adventure, Tokyo DisneySea, the Walt Disney Studios Park and, most recently, Hong Kong Disneyland. Fellow Disney Legend Jim Cora said of Marty, “He understands the Disney way because he learned it at Walt's knee. He is the keeper of the keys, the conscience, the Jiminy Cricket for the organization.” Marty’s final role before retiring in 2009 was as Imagineering’s official ambassador. Marty is one of the founders of Ryman Arts, a training program for young artists that honors Imagineer Herb Ryman; Ryman Arts is of the Disneyana Fan Club’s two official charities.
​